The municipality of Benalmádena, where almost-60,000 people live, is divided into three main parts:

Benalmadena A great place to live 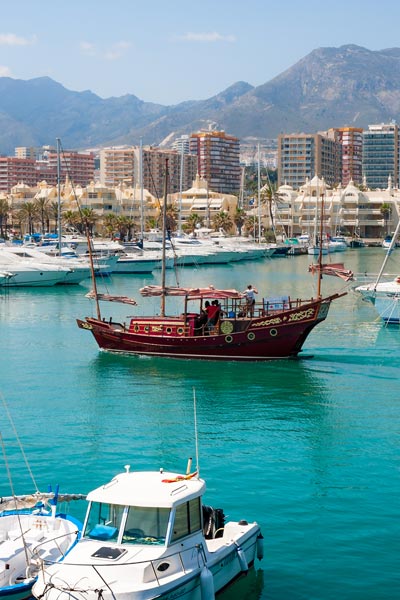 The town of Benalmádena covers an area of almost 30 kilometres and extends from the Sierra de Mijas down to the coastline of the Mediterranean.

Situated between the towns of Torremolinos and Fuengirola, Benalmádena is just 19 kilometres from Málaga Airport and is connected to all of the coast’s major resorts by the local train and bus services.

Rich in attractive beaches, gardens, theme parks and a stunning marina, Benalmádena is one of the most popular tourist resorts on the Costa del Sol.

The population (61,000 according to the INE census of 2010) is concentrated in three main centres: Benalmádena Pueblo, Arroyo de la Miel and Benalmádena Costa.

Benalmádena is rich in attractive beaches and interesting places like, the 33-metre-tall Buddhist Benalmádena Stupa, the largest Buddhist stupa in Europe, the Benalmádena Marina and the Benalmádena Cable Car. Benalmádena covers an area of just over 27 km2 that extends from the summits of the Sierra de Mijas to the sea, falling in some places as a cliff.

It is a privileged town in which its affable people, peaceful atmosphere and beautiful landscape go hand in hand with a wide range of leisure and recreation. Due to Benalmadena’s location, which is geographically situated right in the centre of the Costa del Sol, and at only eleven kilometres from the airport, which is well linked by road, this town can offer possibilities of lively entertainment, a calm place to relax, and an important cultural activity at the same time. This town is presented as the ideal place for any kind of visitor.

Any cookies that may not be particularly necessary for the website to function and is used specifically to collect user personal data via analytics, ads, other embedded contents are termed as non-necessary cookies. It is mandatory to procure user consent prior to running these cookies on your website.